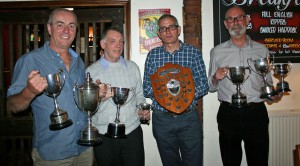 Following the cancellation of recent matches due to the horrendous weather conditions of the last few weeks.  A calm sea with a  light south westerly breeze and plenty of colour in the water gave good conditions for the match but the fish didn’t seem to appreciate them.  Angling was slow with not many fish being caught for the first couple of hours fishing picked up after lunch with a few small whiting and dabs being caught on worm and squid baits.  At the end of the catch and release match it was close with Paul Drake having 15 fish, 5 dabs and 10 whiting for 142 points and Barrie Senior  just ahead on 146 points from his mixed bag of 3 dabs, 1 flounder, 1 pout , 1 bass and 8 whiting. Third place went to Barry Tankard with 2 dabs and 3 whiting for 95 points.  Barry Also had the largest dab 30cm and the largest whiting 31cm.