Conditions at Shingle Street were good for Braintree Sea Angling Club members when they arrived for the last of their Summer League evening matches. The calm sea made fishing easy but it wasn’t until the light began to fade that the first bites came and then it continued to be slow all through the match. Barrie Senior fishing for sole with small hooks unexpectedly caught five thornback rays the largest 43cm across the wings, these together with four sole, a dogfish, a small smoothhound and three whiting gave him 501 fish points a comfortable margin over his nearest competitor Paul Drake. Paul had 173 points he also found a couple of small thornbacks together with a smoothhound, a dogfish and seven whiting. Third place was taken by Robin Joy with 83 points from his catch of 2 whiting and a dogfish. Despite only getting a 3rd place this match Robin won the Summer League amassing 48 match points from the seven matches. Paul Drake and Alan Porter shared second place with 26 match points apiece followed by Stephen Andrews with 21 points. 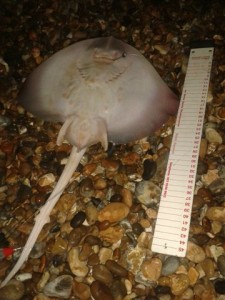 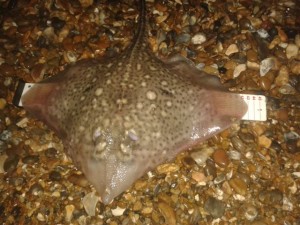 Braintree Sea Angling Club members ventured to a new venue Grays Beach, Thurrock for their latest Summer League match.  Having eventually found the venue they fished off the sea wall into an onshore wind.  Fishing only the flood tide all the anglers found a fish or two but it was Paul Drake with a couple of large eels giving him 39 fish points who won the match.  Second spot went to Alan Porter with a bass and a sole for 30 point.  Robin Joy had one eel for 18 points.  Chris Leonard’s successful run came to an end with him catching only a small dab for 5 points to put him in fourth place.