Braintree Sea Angling Club members fished the second leg of the Mick Allen Shield at Dunwich.  On a busy beach it was along walk to find space to fish but having settled in the anglers had to wait until dusk for the whiting to come on the feed.  At the end of the evening it was Paul Drake who won the match with 18 whiting and a dogfish for 281 fish points.  In second place was winner of the first leg Chris Leonard with 12 whiting, 2 codling and a smoothhound for 273 fish points.  Third place man was Robin Joy with 8 whiting for 108 fish points.  Over the two legs it was a tie with both Paul and Chris having 18 match points however, Chris takes the shield having more fish points over the matches.

Please be advised that the AGM is on 3rd November so the ordinary meeting will start at the earlier time of 20.00

If you have any proposals to be discussed at the AGM please email the secretary by 30th October for inclusion in the Agenda. 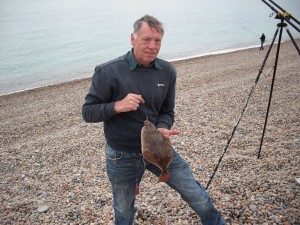 Five members ventured down to Dorset to fish Chesil beach for three days.  Although the numbers of fish were not high they had a good variety of fish over the three days including black bream, cod, flounder, garfish, mackerel, pollack, pout, red mullet, tub gurnard, scad and some baby smoothhounds.   Day two was match day which was won by Paul Drake with two bream, 2 garfish and a cod for 104 fish points.  Second place went to Barrie Senior with 74 points from his catch of one red mullet, two garfish, one bream and a Pollack.  Robin Joy was close behind with a large 38cm flounder and a bream for 72 points.  Over the three days Alan Porter had the best cod a 56cm fish and Stephen Andrews a fine red mullet of about a 1½ lb.

Fished an evening match at Aldeburgh for the first leg of the Mick Allen Shield which started in heavy rain and strong winds and finished with calm conditions. On the flood it was Stephen Andrews  finding sole and whiting to take an initial lead but when the tide turned other members got into the fish.  Chris Leonard  stormed into the lead with his catch of 8 codling and 5 whiting for 421  fish points.  Second place man Paul Drake managed 188 fish points from his catch of one sole, one pout and 15 whiting. Despite his good start Stephen Andrews could only manage third spot with his catch two sole, best 33cm, and 9 whiting for 169 fish points.

Second leg of the shield to be fished at Dunwich on 18 October.