Braintree Sea Angling Club members fished their latest evening match at Shotley.  It was a hard match with fish difficult to find with the crabs destroying baits within minutes. At the end of the evening it was close with both Paul Drake and Barrie Senior having three fish on their score card.  Barrie just pipped Paul with his catch of a flounder, a bass and a whiting for 43 points to Paul’s two bass and a flounder for 39 points.  Kevin Thorpe had a 32 cm whiting to take third spot with 24 points.

Braintree Sea Angling Club members boarded charter boat Enterprise at West Mersea for their latest evening boat competition.  Conditions were good and they were soon anchored up fishing in the late afternoon sun.  Fishing was steady with a trickle of dogfish, undersize whiting and thornback rays coming aboard mainly for the anglers on the port side of the boat.  As the tide eased a move to deeper water saw more fish coming aboard from all around the boat.  By the time the tide turned the wind had increased preventing the boat from sitting nicely in the tide making the last hour of fishing difficult but this didn’t stop Chris Leonard on the stern finding a couple of cod and a bonus smoothhound to ensure a win. His final tally was three cod, four dogfish, one smoothhound, four thornbacks and a whiting for 123 points.  In second place was Barrie Senior with five dogfish, three thornbacks, one whiting and another bonus fish a tub gurnard for 75 points.  Third spot went to Alan Porter with 68 points from his catch of seven dogfish and three thornbacks just ahead of Brian Grundy who had 67 points. 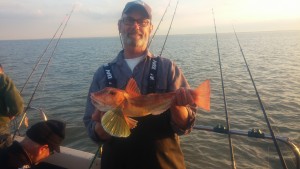 Our assault on Samphire Hoe did not go as well as previous trips, weather good, travel good, company good but fishing 2nd rate

Fishing between lifebuoys 14 and 15 where we were assured there were not too many snags, no one mentioned the lack of fish as well using tactics from a Mr Crabtree Christmas album of float, underwater float, small boom rigs dropped down the side and a few rotten bottoms lobbed out into clearer water we did our best to attract some attention from the fish who did not want to play ball or anything else for that matter. The largest activity was watching some eastern Europeans trying to reach France with their mackerel feathers when there was not a mackerel or garfish for miles but it did keep them occupied.

Only real highlights were the monster wrasse (40cm, about 2lb) caught by Chris and catching a few other species than Essex fish and not a whiting in sight. Nearly forgot the monster blenny that tried to take a bite out of Chris’s finger!

The first of the Summer League evening matches for Braintree Sea Angling Club was fished at St Osyth. Although the rain held off a strengthening on shore wind made casting harder as the match progressed.  All the anglers caught fish but Kevin Thorpe came out on top with a catch of four school bass, five whiting and three good sized eels for 195 fish points.  Second spot went to Steve Andrews with 178 fish points for his catch of one bass, six whiting, two eels and a pout. Barrie Senior took third place with two school bass and ten whiting for 147 fish points.